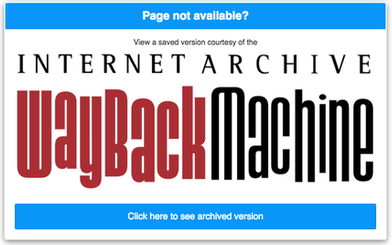 The Wayback Machine is an initiative of the Internet Archive, a 501(c)(3) non-profit, building a digital library of Internet sites and other cultural artifacts in digital form. Other projects include Open Library & archive-it.org.

As of Oct. 23, 2016, the Internet Archive officially holds 273 billion webpages from over 361 million websites, taking up 15 petabytes of storage. Read more about Defining Web pages, Web sites and Web captures.

404 Handler for Webmasters – Help users get where they were going.

Archive-It enables you to capture, manage and search collections of digital content without any technical expertise or hosting facilities.Visit Archive-It to build and browse the collections.

Try New Version! (beta) – Capture a web page as it appears now for use as a trusted citation in the future.

What is the Wayback Machine?

The Wayback Machine is a digital archive of the World Wide Web and other information on the Internet. It was launched in 2001 by the Internet Archive, a nonprofit organization based in San Francisco, California, United States.

Internet Archive founders Brewster Kahle and Bruce Gilliat launched the Wayback Machine in 2001 to address the problem of website content vanishing whenever it gets changed or shut down. The service enables users to see archived versions of web pages across time, which the archive calls a “three dimensional index”. Kahle and Gilliat created the machine hoping to archive the entire Internet and provide “universal access to all knowledge.”

The name Wayback Machine was chosen as a reference to the “WABAC machine” (pronounced way-back), a time-traveling device used by the characters Mr. Peabody and Sherman in The Rocky and Bullwinkle Show, an animated cartoon. In one of the animated cartoon’s component segments, Peabody’s Improbable History, the characters routinely used the machine to witness, participate in, and, more often than not, alter famous events in history. (See “Mr. Peabody and Sherman Episode # 1” below.)

The Wayback Machine began archiving cached web pages in 1996, with the goal of making the service public five years later. From 1996 to 2001, the information was kept on digital tape, with Kahle occasionally allowing researchers and scientists to tap into the clunky database. When the archive reached its fifth anniversary in 2001, it was unveiled and opened to the public in a ceremony at the University of California, Berkeley. By the time the Wayback Machine launched, it already contained over 10 billion archived pages.

Today, the data is stored on the Internet Archive’s large cluster of Linux nodes. It revisits and archives new versions of websites on occasion (see technical details below). Sites can also be captured manually by entering a website’s URL into the search box, provided that the website allows the Wayback Machine to “crawl” it and save the data.

As of September 2018, the Wayback Machine contained more than 25 petabytes of data. 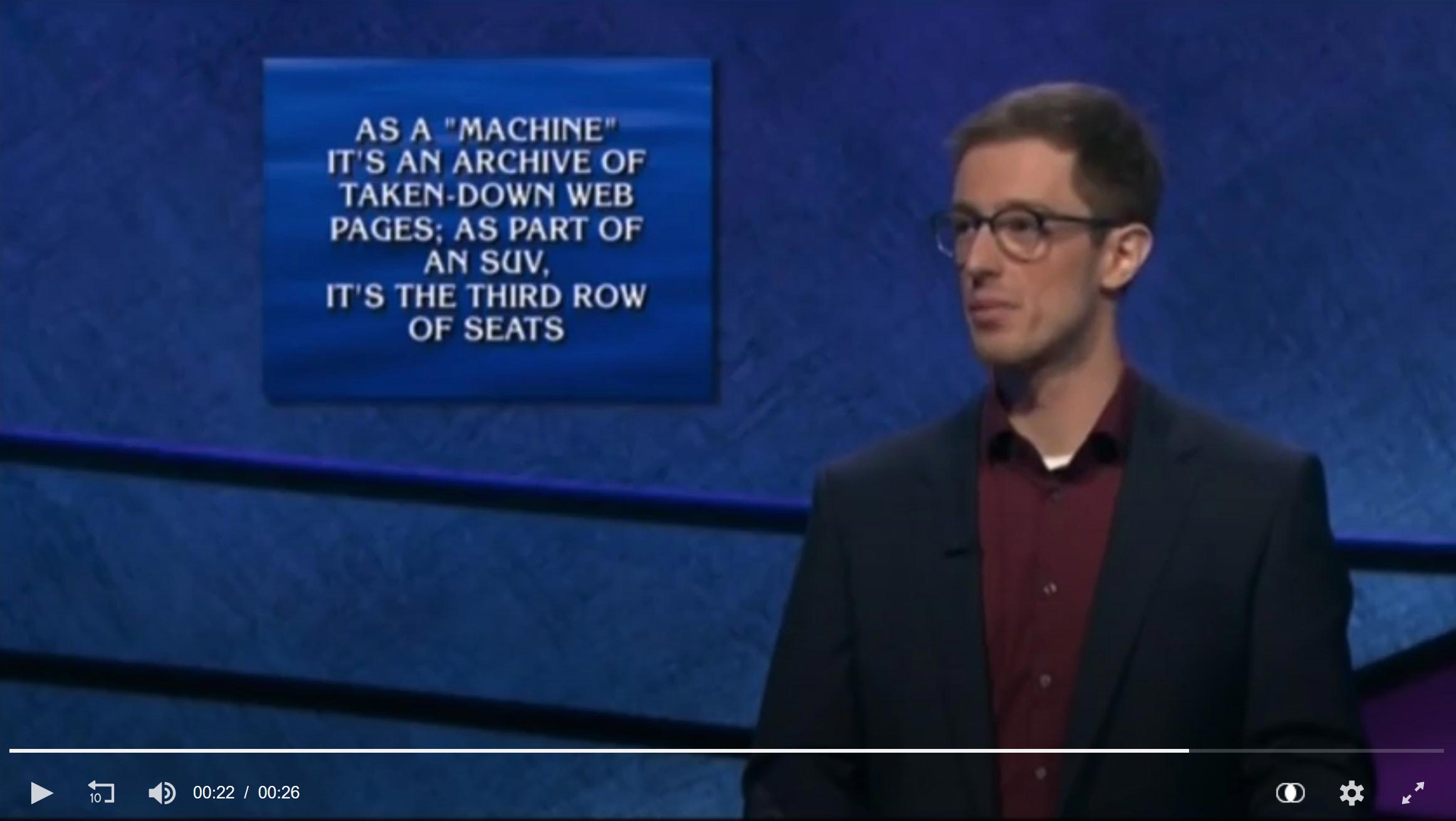 Wayback Machine is the Answer on Jeopardy!

Example of the Wayback Machine’s Usefulness 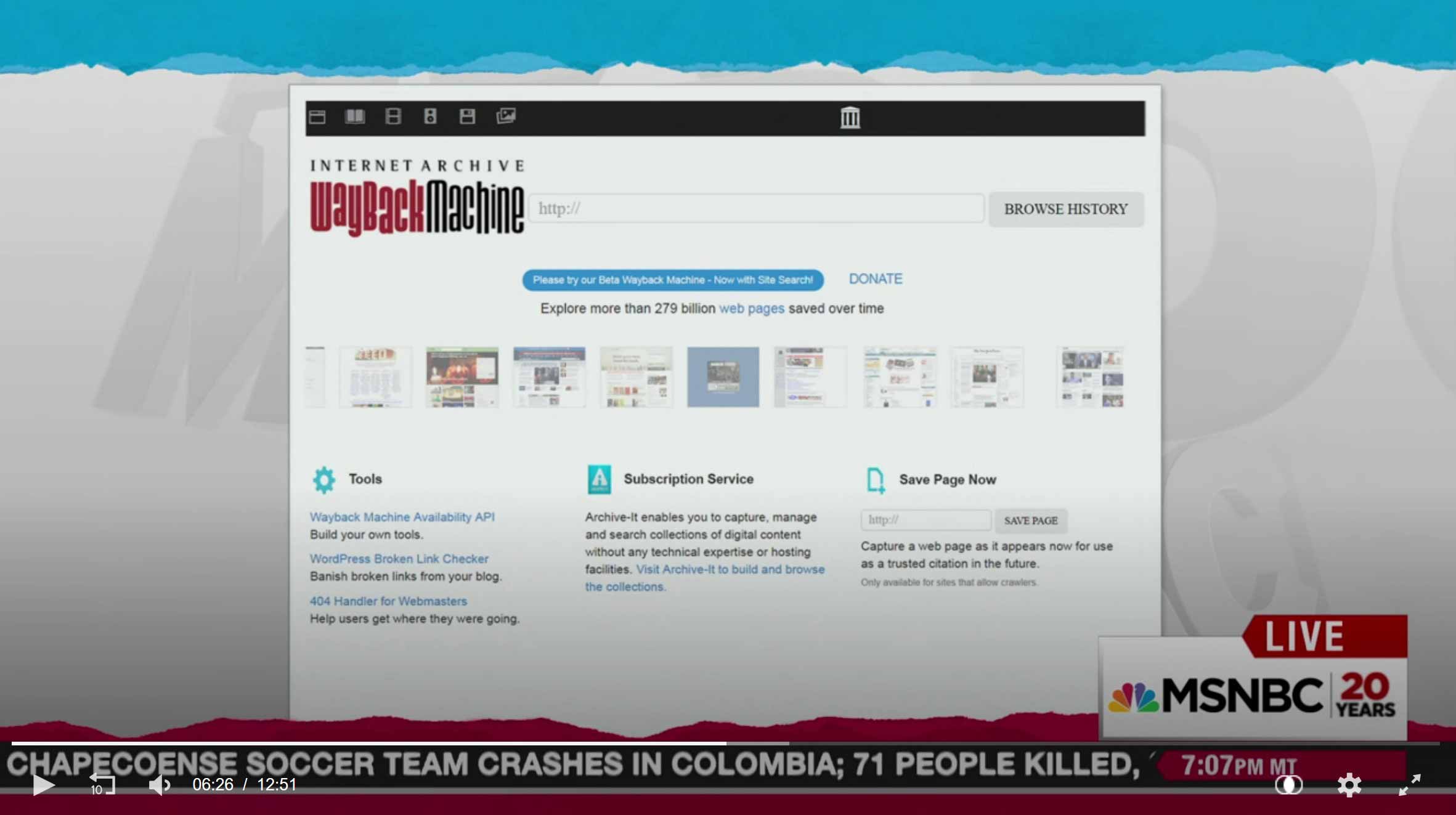 About the Internet Archive

The Internet Archive, a 501(c)(3) non-profit, is building a digital library of Internet sites and other cultural artifacts in digital form. Like a paper library, we provide free access to researchers, historians, scholars, the print disabled, and the general public. Our mission is to provide Universal Access to All Knowledge. 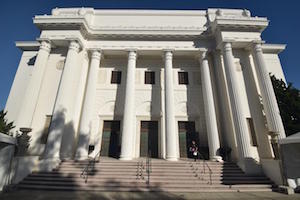 We began in 1996 by archiving the Internet itself, a medium that was just beginning to grow in use. Like newspapers, the content published on the web was ephemeral – but unlike newspapers, no one was saving it. Today we have 20+ years of web history accessible through the Wayback Machine and we work with 450+ library and other partners through our Archive-It program to identify important web pages.

As our web archive grew, so did our commitment to providing digital versions of other published works. Today our archive contains:

Anyone with a free account can upload media to the Internet Archive. We work with thousands of partners globally to save copies of their work into special collections.

Because we are a library, we pay special attention to books. Not everyone has access to a public or academic library with a good collection, so to provide universal access we need to provide digital versions of books. We began a program to digitize books in 2005 and today we scan 1,000 books per day in 28 locations around the world. Books published prior to 1923 are available for download, and hundreds of thousands of modern books can be borrowed through our Open Library site. Some of our digitized books are only available to the print disabled.

Like the Internet, television is also an ephemeral medium. We began archiving television programs in late 2000, and our first public TV project was an archive of TV news surrounding the events of September 11, 2001. In 2009 we began to make selected U.S. television news broadcasts searchable by captions in our TV News Archive. This service allows researchers and the public to use television as a citable and sharable reference.

The Internet Archive serves millions of people each day and is one of the top 300 web sites in the world. A single copy of the Internet Archive library collection occupies 30+ Petabytes of server space (and we store at least 2 copies of everything). We are funded through donations, grants, and by providing web archiving and book digitization services for our partners. As with most libraries we value the privacy of our patrons, so we avoid keeping the IP (Internet Protocol) addresses of our readers and offer our site in https (secure) protocol.

The cartoons are about Peabody, who is the smartest being in existence. Peabody has accomplished many things in his life as a business magnate, inventor, scientist, Nobel laureate, gourmand, and two-time Olympic medalist. Peabody becomes sad and lonely and decides to adopt his own human son. In an alley, he meets Sherman (voiced by Walter Tetley), a bespectacled, red-haired boy. After saving Sherman from a group of bullies, Peabody discovers that Sherman is an orphan and decides to adopt him.

After a court appearance and a talk with the President and the government, Peabody becomes Sherman’s new guardian. Mr. Peabody tells Sherman not to call him “Daddy” and to call him by his name, “Mr. Peabody”, or, when speaking informally, “Peabody”.

Believing that boys need running room, Peabody invents the WABAC time machine as a birthday gift for Sherman. He and Sherman go back in time to see a Roman speaking in Latin; Peabody adds a translator circuit to the machine so that everyone seems to speak English. They see the Roman again and learn that he is a used-chariot salesman. Their next trip is to see Ben Franklin flying his kite that proved lightning was electricity, but Peabody and Sherman discover that they cannot interact with the past. Peabody makes some more adjustments, turning the WABAC into a “should-have-been machine”. This causes past events to seem distorted and anachronistic and famous people to behave out of character. Each of the cartoons usually ends with Mr. Peabody making a bad pun. 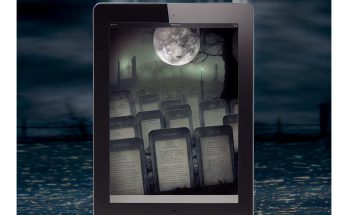