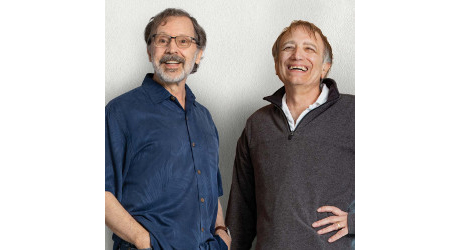 At the time, nobody thought computer graphics were worth much of anything. Catmull, 74, remembers trying to convince Hollywood studio executives that the technology he was working on would be important to the future of movies. “We were so irrelevant that we couldn’t even get in the door to explain anything whatsoever,” he says.

Hanrahan, 66, now a professor at Stanford University, agrees. “At that time, computers were about number crunching, sorting, databases, and all sorts of cool topics,” Hanrahan says. Graphics were viewed as too playful for such a utilitarian machine. “They didn’t see this as something you would interact with like we do today.”

This is only the second time the Turing Award has been awarded for computer graphics. The first, in 1988, went to Ivan Sutherland, who taught the first computer course Catmull took at Utah. At Utah, working in a program funded by the federal Advanced Projects Research Agency, Catmull tackled the problem of how to create images on a curved surface. Computer images were made out of a series of flat polygons, and he had to figure out how to bend them, how to generate a better type of curved surface, and how to know which parts of the 3D image would be visible. The solution to that last problem was z-buffer, which calculates the depth, or z-axis, coordinates of the image.

After finishing his doctorate, Catmull initially took a job with a small company in Massachusetts that was working on computer-aided design, but within a few months was recruited by the New York Institute of Technology (NYIT) to start a computer graphics laboratory. In 1979, Hollywood finally noticed, and Star Wars creator George Lucas hired him to work at LucasFilm developing computer graphics. The graphics division became Pixar in 1986 when Apple founder Steve Jobs bought it; he later sold it to Disney.

Neil Savage is a science and technology writer based in Lowell, MA, USA.