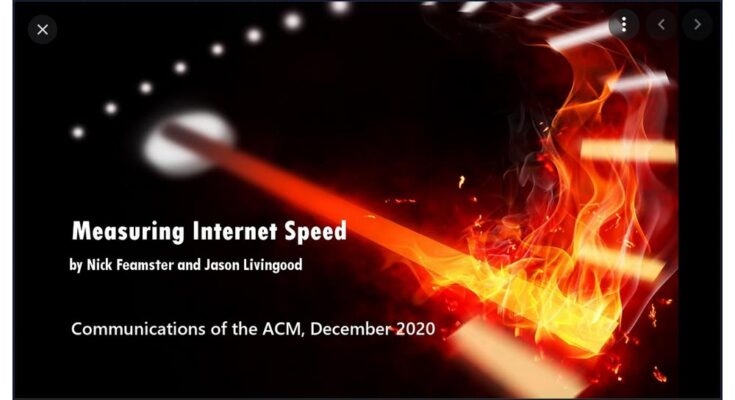 “Many past experiments demonstrate that the user’s Wi-Fi—not the ISP—is often the network performance bottleneck.”

Various governmental organizations have begun to rely on so-called Internet speed tests to measure broadband Internet speed. Examples of these programs include the Federal Communications Commission’s “Measuring Broadband America” program, California’s CALSPEED program, the U.K.’s Home Broadband Performance Program, and various other initiatives in states including Minnesota, New York, and Pennsylvania. These programs have various goals, ranging from assessing whether ISPs are delivering on advertised speeds to assessing potentially underserved rural areas that could benefit from broadband infrastructure investments.

The accuracy of measurement is critical to these assessments, as measurements can inform everything from investment decisions to policy actions and even litigation. Unfortunately, these efforts sometimes rely on outmoded technology, making the resulting data unreliable or misleading. This article describes the current state of speed testing tools, outlines their limitations, and explores paths forward to better inform the various technical and policy ambitions and outcomes.

Some current speed test tools were well-suited to measuring access link capacity a decade ago but are no longer useful because they made a design assumption that the Internet Service Provider (ISP) last mile access network was the most constrained (bottleneck) link. This is no longer a good assumption, due to the significant increases in Internet access speeds due to new technologies. Ten years ago, a typical ISP in the United States may have delivered tens of megabits per second (Mbps). Today, it is common to have ten times faster (hundreds of megabits per second), and gigabit speeds are available to tens of millions of homes. The performance bottleneck has often shifted from the ISP access network to a user’s device, home Wi-Fi network, network interconnections, speed testing infrastructure, and other areas.

A wide range of factors can influence the results of an Internet speed test, including: user-related considerations, such as the age of the device; wide-area network considerations, such as interconnect capacity; test-infrastructure considerations, such as test server capacity; and test design, such as whether the test runs while the user’s access link is otherwise in use. Additionally, the typical Web browser opens multiple connections in parallel between an end user and the server to increasingly localized content delivery networks (CDNs), reflecting an evolution of applications that ultimately effects the user experience.

These developments suggest the need to evolve our understanding of the utility of existing Internet speed test tools and consider how these tools may need to be redesigned to present a more representative measure of a user’s Internet experience.

Nick Feamster is the Neubauer Professor in the Computer Science Department and Director of the Center for Data and Computing at the University of Chicago, IL, USA.