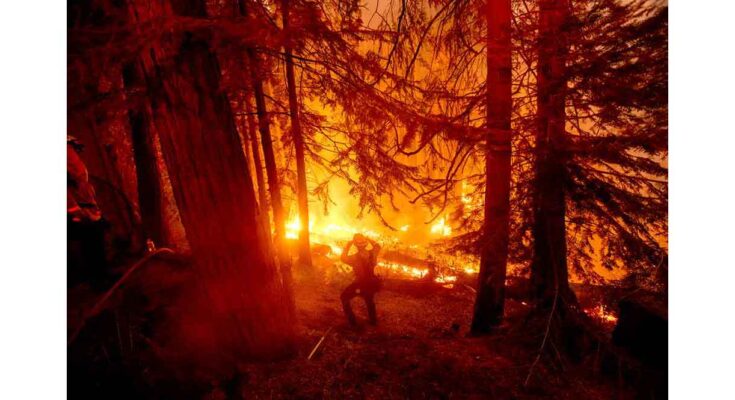 “It’s time to reverse a century of fire-management policy. That will require sweeping regulatory reforms, and tons of money.”

Five of California’s 10 largest fires in modern history are all burning at once. Together, this year’s wildfires have already destroyed 4,200 buildings, forced hundreds of thousands of people to flee their homes, and scorched more than 3.2 million acres across the state.

That’s larger than Yellowstone and Yosemite National Parks combined, and nearly half the area of Massachusetts. The latest blazes follow a string of particularly deadly and devastating fire seasons in California, and scientists say climate change will ensure even worse ones to come.

To anyone who lives here, or anyone who’s watching, the situation is maddening and seems utterly unsustainable. So what’s the solution?

There’s an overwhelming to-do list. But one of the clearest conclusions, as experts have been saying for years, is that California must begin to work with fires, not just fight them. That means reversing a century of US fire suppression policies and relying far more on deliberate, prescribed burns to clear out the vegetation that builds up into giant piles of fuel.

Such practices “don’t prevent wildfires,” says Crystal Kolden, an assistant professor at the University of California, Merced focused on fire and land management. “But it breaks up the landscape, so that when wildfires do occur, they’re much less severe, they’re much smaller, and when they occur around communities, they’re much easier to control.”

The Great Fire of 1910 burned 3 million acres across Idaho, Montana, and surrounding areas, killed nearly 90 people, destroyed several towns, and famously ushered in an era of zero tolerance for fires in the US. It and severe fires that followed prompted the US Forest Service to officially implement the “10 a.m. policy” in 1935, with a goal of containing any fire by that time the morning after it was spotted.

Decades of rushing to stamp out flames that naturally clear out small trees and undergrowth have had disastrous unintended consequences. This approach means that when fires do occur, there’s often far more fuel to burn, and it acts as a ladder, allowing the flames to climb into the crowns and take down otherwise resistant mature trees.

Climate change, which exacerbates these risks, seems to have finally tipped the balance of what was an increasingly untenable situation, says Anthony LeRoy Westerling, who is also at UC Merced. In California, it almost certainly intensified the prolonged drought earlier this decade, which killed some 150 million trees in the Sierra Nevada range.

Meanwhile, temperatures are rising and rainfall patterns are becoming more extreme. Unusually wet winters promote the growth of trees and other plants, followed by dry, hot summers that draw the moisture out of them.

This creates a tinderbox when the gusty winds arrive in the fall: a vast buildup of dry fuel just awaiting a spark, whether from a lawnmower, downed power line, or lightning strike.

James Temple: I am the senior editor for energy at MIT Technology Review. I’m focused on renewable energy and the use of technology to combat climate change. Previously, I was a senior director at the Verge, deputy managing editor at Recode, and columnist at the San Francisco Chronicle. When I’m not writing about energy and climate change, I’m often hiking with my dog or shooting video of California landscapes.