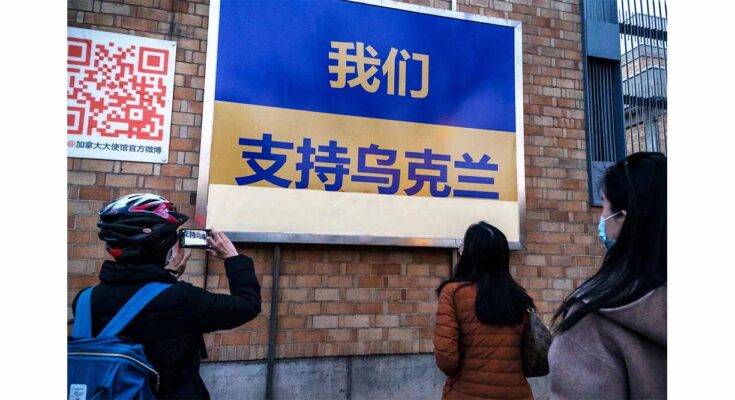 “Posts that glorify war and those that criticize Russia are getting quietly deleted, as platforms are pressured to walk a thin line.”

“Artillery fire lights up the sky and breaks my heart. I hope my compatriots in Ukraine are taking care of themselves and their families,” said a user on Weibo, often called China’s Twitter, on February 27. The message was quickly blocked, according to Free Weibo, a service of Great Fire, which tracks Chinese censorship online.

Two days later, a very different message appeared on Weibo: “I support fighting! America and Taiwan have gone too far.” That, too, was blocked, according to Free Weibo.

The messages—and their quick disappearance—show how Chinese social media platforms find themselves in the crosshairs of the Russia-Ukraine war. The platforms must be sure to toe the official line amid subtle shifts in China’s position. Their responses could be an early test of new rules governing how companies use algorithms, which may make them responsible for trending topics and fake news appearing on their sites.

In general, Chinese online platforms receive daily guidance from the government about what sort of content to remove, says Yuqi Na, a researcher in media and communications at the University of Westminster.

A hint of how that works emerged in the days leading up to the invasion. On February 22, a Chinese outlet called Horizon News briefly posted, probably by accident, what appear to be internal instructions for how to spin the Ukraine crisis on its official Weibo account. Among the supposed rules: “Do not post anything unfavorable to Russia or pro-Western.”

The instructions also said to monitor comments and only use hashtags started by state outlets Xinhua, CCTV, or People’s Daily, according to China Digital Times. That sort of direction to follow the lead of major state outlets is common, says Maria Repnikova, an assistant professor in global communication at Georgia State University and author of Chinese Soft Power.

Prior to the invasion, Chinese state media outlets and officials’ Twitter accounts repeated a drumbeat of US warmongering, and brushed off the possibility of an invasion. Once the assault began, China was put in the awkward position of having to reconcile its long-standing policy of noninterference and respecting national sovereignty with its ties to Russia. Just weeks earlier, the two countries reaffirmed their relationship when Russian president Vladimir Putin was a VIP guest at the Beijing Winter Olympics.

In the early days of the war, Chinese state media seemed surprised and took a cautious approach. The relatively sparse coverage largely echoed Russian outlets, calling the conflict a “special military operation” and placing the blame on the US and NATO. “It’s quite intentional,” says Na. “A lot of internet users buy into that narrative when it’s their main information source.”

Jennifer Conrad is a writer in Brooklyn. She has written for Vogue, SupChina, and Newsweek.com. She recently received an MA from Johns Hopkins School of Advanced International Studies.