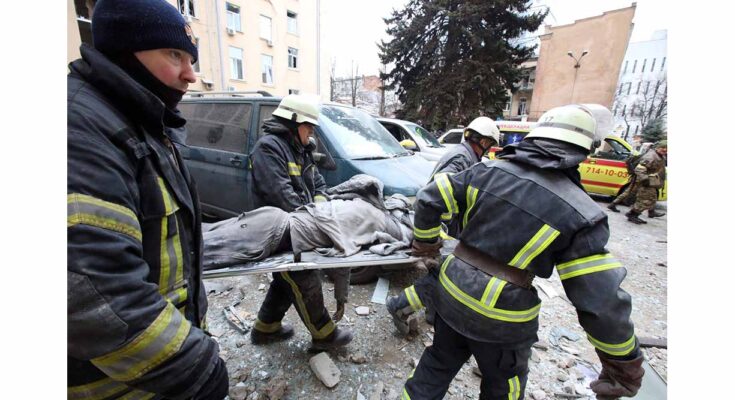 In the central Ukrainian city of Uman, a bloodied body lies lifeless in the street. It’s February 24, and Russia’s invasion of its neighbour has just begun. Debris is strewn across the road and the windows of nearby cars have been shattered. CCTV footage from a nearby shop shows a huge explosion took place here at just after 7am local time. A crater, clearly visible in social media video, appears to confirm a rocket was the cause of the explosion, taking the life of the individual lying motionless nearby.

Two days later in Melitopol, a camera is pointed at the front of a hospital in the centre of the city. The rapid patter of gunfire can be heard as the shaky footage focuses on what is described as the hospital’s oncology department. A number of unidentified munitions strike the building leading to several small explosions. The camera pans around and a giant red cross that adorns the hospital entrance is visible. This menacing and chaotic scene is captured by an individual standing outside residential apartment blocks that look on to the facility.

Bellingcat has been documenting and logging incidents such as these – which have been posted to social media channels – and others that appear to depict incidents of civilian impact or harm since the beginning of the conflict.

Some detail incidents of extreme violence as they take place while others appear to show the aftermath of missile strikes or shootings.

With more videos and images coming to light each day, Bellingcat and members of its Global Authentication Project have begun to log and map these incidents on an interactive TimeMap. 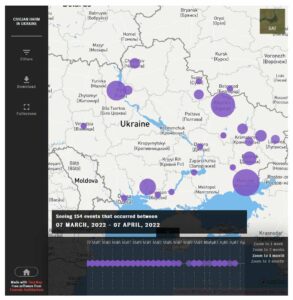 The Global Authentication Project consists of a community of open source researchers assisting in Bellingcat research through structured tasks and feedback. For this dataset, we are working with many individuals who have Ukrainian language skills and others with local contextual knowledge of the events and places seen on the map. Other participants include individuals skilled in geolocation and chronolocation, with all contributions being vetted by Bellingcat researchers.

The aim of this project is to detail incidents where there is open source evidence of potential civilian harm in Ukraine, as well as attempting to clarify where and when such events took place. Documenting these incidents is important given claims by the Russian government in particular that it is not seeking to attack civilians and avoid impacting civilian infrastructure.

Readers are invited to explore the map by date and location. It must be noted that only events that have been pictured, captured on video or posted to social media are included in Bellingcat’s dataset. It is likely that there will be many other instances of civilian harm that are not documented on video or on social media and therefore not included in the TimeMap.

Even accounting for that caveat, the number of incidents detailed in our dataset and TimeMap at time of initial publication is already significant.

We will continue to update our dataset and the TimeMap as the conflict progresses. The map will also remain online after the conflict ends.

How Does the TimeMap Work?

Each dot on the map represents an incident of civilian damage or harm and the location where that incident took place. By clicking on a dot, readers will be presented with information about an incident, often including one or more embedded links to footage or images depicting what happened.

The Bellingcat Investigation Team is an award winning group of volunteers and full time investigators who make up the core of the Bellingcat’s investigative efforts.