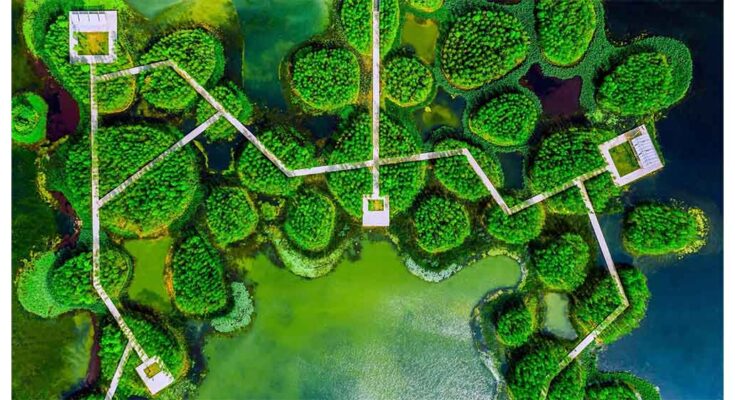 “One Chinese landscape designer has pioneered a new approach—working with water instead of trying to bend it to our will.”

For years, Beijing landscape architect Yu Kongjian was ridiculed by his fellow citizens as a backward thinker. Some even called him an American spy—a nod to his doctorate from Harvard’s Graduate School of Design and his opposition to dams, those symbols of power and progress in modern China.

Yu’s transgression: he advised working with water, rather than trying to control it.

Yu is at the forefront of a movement that aims to restore the ebb and flow of water to urban environments. His landscape architecture firm Turenscape, which he cofounded in 1998, creates flexible spaces for water to spread out and seep underground, both to prevent flooding and to be stored for later use. His vision is to heal the natural hydrology that we’ve disrupted by tightly confining rivers with levees, putting buildings or parking lots where water wants to linger, or erecting dams that have, to varying degrees, dried up 333 rivers in the Yangtze area. “Those gray infrastructures are actually killers of the natural system, which we have to depend on for our sustainable future,” Yu has said. By trying to solve one problem at a time—flooding here, water scarcity there—the 20th-century approach to water management has undermined itself. “Drainage is separated from the water supply; flood control is separated from drought resistance,” he wrote in 2016 for a paper he presented at a Harvard symposium.

Since the 1700s, we’ve filled or drained as much as 87% of the world’s wetlands, which would otherwise be flexibly absorbing and releasing water. It’s a key reason urban flooding is increasing worldwide: as populations grow and cities expand, builders pave floodplains and farmland, fell forests, and channelize rivers, leaving stormwater that once filtered into the ground with nowhere to go. The land area lost to cities has doubled worldwide since 1992. When a city increases the area of roads, sidewalks, or parking lots by 1%, stormwater runoff boosts annual flood magnitude in nearby waterways by 3.3%.

In dense cities, only around 20% of rain actually infiltrates the soil. Instead, drains and pipes carry it away—lunacy, Yu thinks, in places with water shortages.

In the early 2000s, Yu and a research team created a map of Beijing showing where land was at high risk for flooding, which he called the “ecological security pattern.” His recommendation was that this land should remain undeveloped, and should be used instead to absorb stormwater.

Government officials ignored him. But then, in July 2012, disaster struck. Beijing’s largest storm in more than 60 years chucked down as much as 18 inches of rain in places, flooding roads three feet deep and filling underpasses. Yu barely made it home from work. “I was lucky,” he says. “I saw many people abandon their cars.” Almost 80 people died, most of them drowned in their vehicles, electrocuted, or crushed under collapsed buildings. The damage stretched across 5,400 square miles and cost nearly $2 billion.

“The 2012 flood gave us the lesson that the ecological security pattern is a life-and-death issue.” Yu says.

Climate change has worsened these threats. With every 1 °C increase, the atmosphere holds 7% more water vapor. So when clouds burst into rain, it pours. Meanwhile, dry areas get drier as the warmer air evaporates more water out of soil and plants.

Now we’re starting to see the impact on the water cycle. Summer and fall 2021 brought deadly flooding to New York, New Jersey, Tennessee, Alabama, Germany, Belgium, India, Thailand, and the Philippines. At the same time drought, crop failures, and forest fires plagued the American West, Syria, Guatemala, Greece, and Siberia. Global economic losses from flooding rose from $500 million annually, on average, in the 1980s to $76 billion in 2020. When it comes to drought, more than 2 billion people around the world already live with severe or high water insecurity. Researchers predict that as the climate continues to warm, two-thirds of the global population—more than 5.25 billion people—will experience progressively worse and more frequent drought conditions.

These recent disasters have brought home to many people the truth of what climate scientists have been saying for years: climate change is water change.

Erica Gies is a contributing writer for MIT Technology Review and is the author of Water Always Wins: Thriving in an Age of Drought and Deluge.