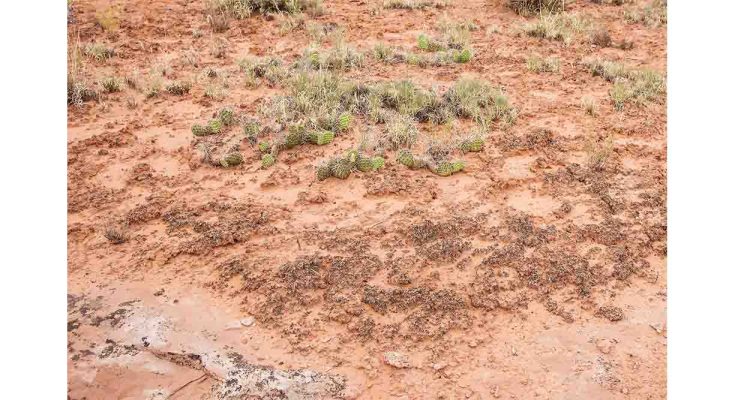 “Climate change and human activity are destroying the layers of fungi, lichen, and bacteria that protect deserts from erosion.”

Eighty-five miles from the small town of Moab, Utah, located on the Colorado Plateau in the southwest of the US, soil ecologist Rebecca Finger-Higgens is hopscotching on copper-toned sandstone to avoid stepping on the desert’s black, burnt-looking crust of soil. “Don’t bust the crust,” the saying here goes. “Don’t tiptoe on the crypto.”

Cryptobiotic soil—or biocrust—forms the top layer of the desert, a “skin” squirming with living organisms. Just as microscopic organisms are vital to our health (think gut bacteria for digestion and disease prevention), the desert’s skin hosts a whole community of organisms that are vital to the ecosystem. Without the desert’s skin, much less life would exist in these lands; flowers would wilt and sparse pockets of shrubs would struggle to survive.

The plateau’s biocrust is easily identifiable under a bright yolk sun: a dark, bumpy surface that stretches between shrubs, like snakeweed and yucca, and the towering buttes and mesas that make up the Colorado Plateau’s iconic landscape. It’s here that Finger-Higgens pricks metal pin flags into square grids that crisscross 12 football-field-sized plots of land.

She’s part of an ongoing study that has tracked the health of biocrusts since 1996, with some records reaching back as far as 1967. Until the past few decades, biocrusts have been largely overlooked; the desert’s scruffy top layer was seen as a static feature of the ecosystem. It’s only relatively recently that the importance of biocrusts in sustaining the life and integrity of the desert has been understood—and that damage to them has been recorded.

“I think the study is awesome,” says Matthew Bowker, a soil ecologist and associate professor at Northern Arizona University who was not involved in the research. “It’s pretty much the only data set of biocrusts that I know of that goes back that far.”

Finger-Higgen calls the plots of land here “pristine.” By this, she means no cattle have grazed on the land, and bikers and hikers are prohibited. Pristine is an important distinction. If you’ve been to Moab and the surrounding canyonlands, you’ll know that all-terrain vehicles roar out of town and through the landscape, usually on designated roads but sometimes swerving off-piste and into unpaved desert. Cattle graze through the land, and enthusiastic hikers tromp the soil in boots. And yet the desert’s harsh reputation belies the fragility of a landscape where life lives on the edge.

Scientists colloquially refer to biocrusts as “living skin” because the first organisms to take up residence are cyanobacteria, which under a microscope look like little worms that glide through the soil, leaving a trail of sticky fibers in their wake. Soil particles stick to these fibers and create a spongelike structure that absorbs water when it rains. Soon moss, algae, fungi, and lichens move in as tenants. It can take years to decades—and in extreme cases up to a century—for this community to form a thick, knobby crust.

Everyone can help with this, Finger-Higgens says. “If you are traveling off-trail or in the backcountry, think about where you’re stepping. Try to minimize your impact.” In other words: Don’t bust the crust.