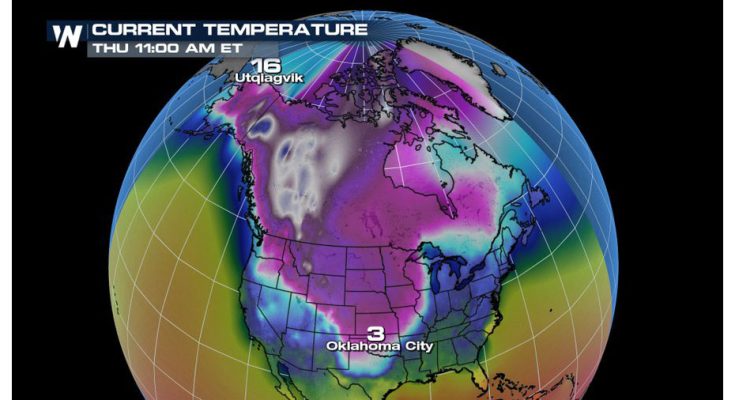 The United States was hit by historically cold and windy Winter weather with a rare mid-latitude mid-continent cyclone, one that would undergo a process of rapid intensification called Bombogenesis, or Bomb Cyclogenesis. The event was termed “Winter Storm Elliott.” This is a collection of some of the news stories, video and images about the storm and some of its effects. The image above depicts the extent of the cold on Thursday, Dec. 22 @ 11:00 am ET.

The storm began in the Pacific Northwest on Dec. 20 with up to 2 feet of snow in the Cascade Mountains with temperatures in the teens and 20s in Seattle. It moved through the Rocky Mountains and into the Plains on Dec. 21. Temperatures dropped 30 to 50 degrees in Wyoming and Colorado, with Denver dropping to -24, setting a local record of a 37° drop in one hour. On Dec. 23 the storm went through bombogenesis over the Great Lakes region, with the low-pressure centered over Sudbury, Ontario, Canada at ~7:30am Dec 23rd. During this storm temperatures dropped dramatically across a large swath of the United States, as depicted in the maps below.  Freezing temperatures were experienced as far south as the Gulf of Mexico, with below freezing temps from Corpus Christi, Texas to Gainsville, Florida.

The maps above are all cropped to make comparison between maps easier. Uncropped versions of the original maps (Dec. 25 & 29)  provide information about a larger region but are harder to compare. I’m providing those below because they show conditions in the surrounding regions which is interesting to look at.

Imagery showing the view from the GOES-East satellite, both Canada (upper) and Continental United States (lower) views on Sunday morning at 12:20 AM Central Time , December 25, 2022. 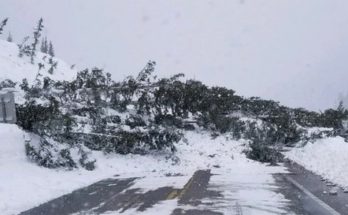