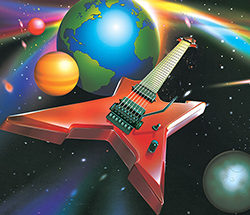 “The rock era and the space age exist on parallel time lines. The Soviets launched Sputnik in October 1957, the same month Elvis Presley hit #1 with “Jailhouse Rock.” The first Beatles single, “Love Me Do,” was released 23 days after John F. Kennedy declared that America would go to the moon (and not because it was easy, but because it was hard). Apollo 11 landed the same summer as Woodstock. These specific events are (of course) coincidences. Yet the larger arc is not. Mankind’s assault upon the heavens was the most dramatic achievement of the 20th century’s second half, simultaneous with rock’s transformation of youth culture. It does not take a deconstructionist to see the influence of the former on the latter.”