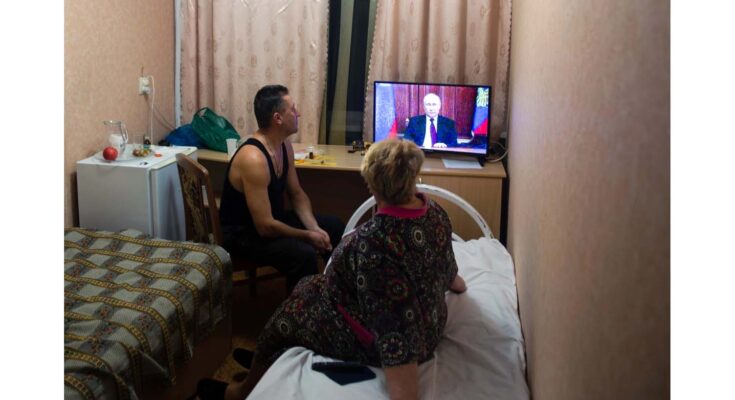 “From pop-up notifications to Facebook ads, campaigners in Ukraine and beyond are using any means necessary to beat Russia’s information firewall.”

Targeted ads follow us around the internet, pitching us everything from meme-based T-shirts to Mahabis slippers wherever we go. Now the power of tracking pixels and pop-up ads is being used to try to tell ordinary Russians what’s really happening during the invasion of Ukraine

“We’ve seen the powerful role that civil society can play in telling the story of Ukraine, advocating for its interests, and rallying international support,” says Jack Pearson, a foreign policy communications specialist who previously worked for the UK Foreign Office specializing in digital diplomacy. “Now we’re seeing efforts from communities around the world to break the Kremlin’s information stranglehold, to reach ordinary Russians.”

Reliable news is hard to get in Russia at the moment. State news outlets are telling viewers that the invasion is a defensive move, while independent Russian stations like TV Rain are being shut down at the behest of authorities. Meanwhile, international press organizations such as the BBC and Voice of America have been blocked. To fill the information void, a small army of activists are exploiting holes in the Russian firewall. In so doing, they’re trying to provide a modicum of fact in a Russian media ecosystem that is increasingly untethered from the truth.

The activists puncturing holes in Russia’s propaganda machine are taking any opportunity they can. Users of the Russian pharmacy chain Ozerki’s app received push notifications overnight on February 28 telling them to “wake up” to Vladimir Putin’s attempt to steal the lives of Russian soldiers, alongside the Russian population’s money, by sending his countrymen to war. The chain later said it had been the victim of a hack.

Digital campaigners have been bombarding Yandex, the Russian equivalent of Google, with falsified reviews of major locations in the country that spread the truth about Putin’s incursion into Ukraine. One Ukraine-born, America-based academic has emailed thousands of her Russian colleagues to let them know what’s going on in her homeland at their army’s hands.

New Now, a Web design agency in Berlin, has posted a web script on GitHub that will push a pop-up onto any web page where the script is included, telling those accessing the website from a Russian IP that their government is lying to them, and that innocent people and children are being killed.

“This whole thing, from a development point of view, is super simple,” says Kai Nicolaides of New Now, who wrote the script. He came up with the idea when seeing the sources of traffic to the websites of personal projects he ran. “Those projects might not be blocked for Russian visitors, because they’re not significant enough from an information point of view,” he says.

“We’re not a foreign news source or anything—they’re just fun projects.” The concept was to raise awareness for those who have no idea of what’s going on—and to prompt those who do know to think a little deeper. “We thought most Russians will know something is fishy, but maybe there are a few who will need a nudge,” says Nicolaides. “We thought we could start this grassroots movement.”

The canny tricks to put chinks in the Russian state narrative about Ukraine also include placing online ads that aim to tell the truth about what’s going on.