I wanted a word that would encapsulate / connote my collection of seemingly disparate content categories for the section of my website that didn’t focus purely on my web design business. I wanted something fun, different and unexpected. When I came across “Salmagundi” it felt right, so I went with it. Salmagundi sounds a bit like Solomon Grundy, and some think that’s what I mean. There may be some connection between the two words, maybe one was confused for the other, or vice versa. They’re both interesting words and I’m including a bit on both here…

n. pl. sal·ma·gun·dis 1. A salad of chopped meat, anchovies, eggs, and assorted fruits and vegetables, often arranged in rows on lettuce and served with vinegar and oil. 2. A mixture, assortment, hash, hodgepodge, jumble, medley or mishmash; a potpourri.

Read more about the words themselves

Weird Words — Salmagundi Salad — What’s got the name Salmagundi?
— Who or What is Solomon Grundy?

Though this is now used mainly in a figurative sense of a mixture or miscellany, it was first attached in English to a dish of chopped meat, anchovies and eggs, garnished with onions, lemon juice, oil and other condiments. A gastronomic dog’s breakfast, you may think.

We know that the word came to us in the seventeenth century from the French salmigondis, of which older spellings in that language were salmiguondin and salmingondin. Here the trail of linguistic footprints ceases, and we must cast about to pick up the route again. One theory is that it was a dish first prepared for the French king Henri IV (or Henri VI in another version) by a nobleman’s wife, after whom it was named. Another, more prosaic but more plausible, is that it derives from the Italian phrase salame conditi, “pickled meat”. Yet another says it comes from the French salemine, “salted food” and condir, “to season”.

In English the name was corrupted to Solomon-gundy in the eighteenth century, and it’s probable that it’s related to the name in the children’s rhyme: “Solomon Grundy, born on a Monday, christened on Tuesday, married on Wednesday, took ill on Thursday, worse on Friday, died on Saturday, buried on Sunday, that is the end of Solomon Grundy”, which was first set down by James Orchard Halliwell in 1842.

What is a Salmagundi Salad?

Salmagundi is more of a concept than a recipe. Essentially, it is a large composed salad that incorporates meat, seafood, cooked vegetables, raw vegetables, fruits, and nuts and is arranged in an elaborate way. Think of it as the British answer to Salad Niçoise.

Dating back to the seventeenth century, salmagundi refers to the large assortment of ingredients that give the diner a large range of flavors and textures on one plate. But it’s also, in true British form, a way to use leftover roasts and vegetables in a new, striking way. The meal-sized salad is normally served for lunch or as part of a picnic.

While I have included recipes for an assortment of ingredients to serve in your salmagundi, don’t feel inhibited. Use what is fresh, or what you have in the fridge, or what you feel like eating at that moment. Just make sure to include a wide variety of ingredients and plate the dish on a large serving platter, for the best first impression when you place your salmagundi on the table.

You could also have Solomon Grundy for dinner…

What’s got the name Salmagundi? 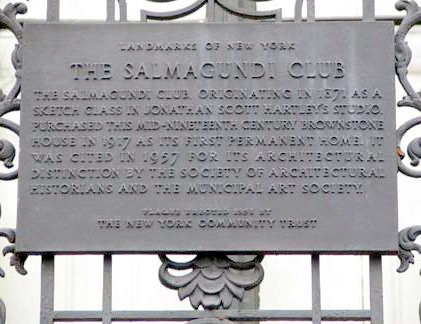 Membership in Salmagundi Club opens the door to an exhilarating world of art: colorful gallery exhibitions; painting demonstrations by nationally recognized artists; classes in drawing and painting; and a host of social activities.

The landmark brownstone headquarters at 47 Fifth Avenue in Greenwich Village – historic spawning ground for so many great American artists – is a gracious center which provides the comfort of a contemporary club in surroundings of elegant and aesthetic appeal. – Founded in 1871, the Salmagundi Club is one of the oldest art organizations in the United States. Housed in an historic brownstone mansion in Greenwich Village, New York City, the Club offers programs including art classes, exhibitions, painting demonstrations, and art auctions throughout the year for members and the general public.

Originally formed as the Salmagundi Sketch Club in 1871, the Club adopted its present name a hundred years ago after Washington Irving published his potpourri of wit and wisdom called “The Salmagundi Papers”. The name also serves as the club dining room’s famous “Salmagundi Stew”.

Salmagundi – An international quarterly magazine of politics, culture, literature and the arts published at Skidmore College. “Salmagundi is not a tame or genteel quarterly. It invites argument, and it makes a place for literature that is demanding, including novella-length fiction and essays that—in terms of length and range of interest—go well beyond the fare served up by the better weeklies and monthlies. Founded in 1965 and published since 1969 at Skidmore College, Salmagundi routinely publishes essays, reviews, interviews, fiction, poetry, regular columns, polemics, debates and symposia. It is widely regarded as one of the most influential intellectual quarterlies in the United States, and though often discussed as a “little magazine,” it is by no means predominantly belletristic or narrow in its purview or its audience.”

Wikipedia has an entry for Salmagundi (magazine).

You can find copies of past issues at AbeBooks.com. 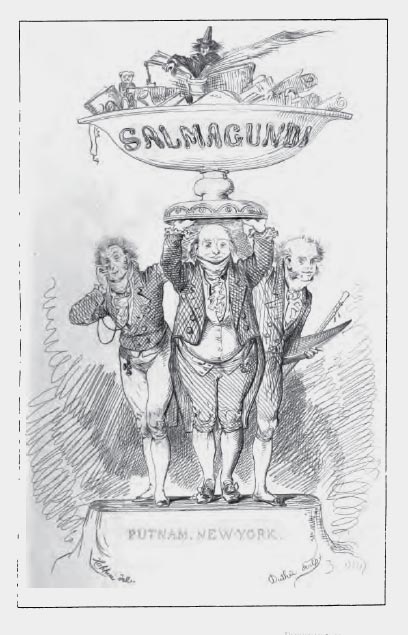 Salmagundi; or The Whim-whams and Opinions of Launcelot Langstaff, Esq. & Others, commonly referred to as Salmagundi, was a 19th-century satirical periodical created and written by American writer Washington Irving, his oldest brother, William, and James Kirke Paulding. The collaborators produced twenty issues at irregular intervals between January 24, 1807 and January 15, 1808.

Salmagundi lampooned New York City culture and politics in a manner much like today’s Mad magazine. It was in the November 11, 1807, issue that Irving first attached the name “Gotham” to New York City, based on the alleged stupidity of the people of Gotham, Nottinghamshire.

Irving and his collaborators published the periodical using a wide variety of pseudonyms, including Will Wizard, Launcelot Langstaff, Pindar Cockloft, and Mustapha Rub-a-Dub Keli Khan.

Irving and Paulding discontinued Salmagundi in January 1808, following a disagreement with publisher David Longworth over profits.

[Entry for Salmagundi (periodical) in Wikipedia.]

– You can find bound copies of this periodical at AbeBooks.com. 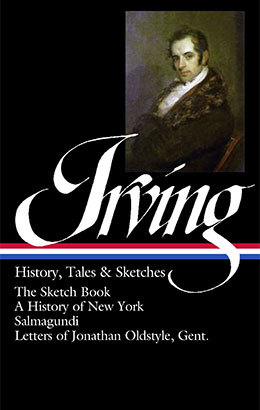 Washington Irving’s career as a writer began obscurely at age seventeen, when his brother’s newspaper published his series of comic reports on the theater, theater-goers, fashions, balls, courtships, duels, and marriages of his contemporary New York, called Letters of Jonathan Oldstyle, Gent. Written in the persona of an elderly gentleman of the old school, these letters captured his fellow townsmen at play in their most incongruous attitudes of simple sophistication. Irving’s next work, Salmagundi, written in collaboration with his brother William and James Kirke Paulding, and published at irregular intervals in 1805–06, continued this roguish style of satire and burlesque. Gossipy and current, filled with the latest news of the theater and other goings-on about town, or stirring up yet another literary squabble or scandal, Salmagundi is written with the innovativeness and energy of an accomplished new voice bursting upon a startled literary scene.

A History of New York, publicized by an elaborate hoax in the local newspapers concerning the disappearance of the elderly “Diedrich Knickerbocker,” turned out to be a wild and hilarious spoof that combined real New York history with political satire. Quickly reprinted in England, it was admired by Walter Scott and Charles Dickens (who carried his copy in his pocket). In later years, as Irving revised and re-revised his History, he softened his gibes at Thomas Jefferson, the Dutch, and the Yankees of New England; this Library of America volume presents the work in its original, exuberant, robust, and unexpurgated form, giving modern readers a chance to enjoy the version that brought him immediate international acclaim.

– You can read Salmagundi on Questia.com.

Other things with the name Salmagundi include:

There may well be others, but there’s only so much time in a day. I’m sure you could find more using your favorite search engine…

Who or What is Solomon Grundy?

“Solomon Grundy” is an English nursery rhyme. It has a Roud Folk Song Index number of 19299.

The rhyme has varied very little since it was first collected by James Orchard Halliwell and published in 1842 with the lyrics: 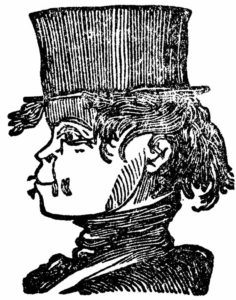 “Solomon Grundy,
Born on a Monday,
Christened on Tuesday,
Married on Wednesday,
Took ill on Thursday,
Grew worse on Friday,
Died on Saturday,
Buried on Sunday,
That was the end,
Of Solomon Grundy.”

You’ll find a raft of references in popular culture listed in the Wikipedia article for Solomon Grundy.

“The nursery rhyme is the inspiration for the DC Comics character Cyrus Gold/Solomon Grundy, a large, strong zombie supervillain created in 1944 as an adversary for the Green Lantern, though later a common foe of Batman and Superman.” —Wikipedia