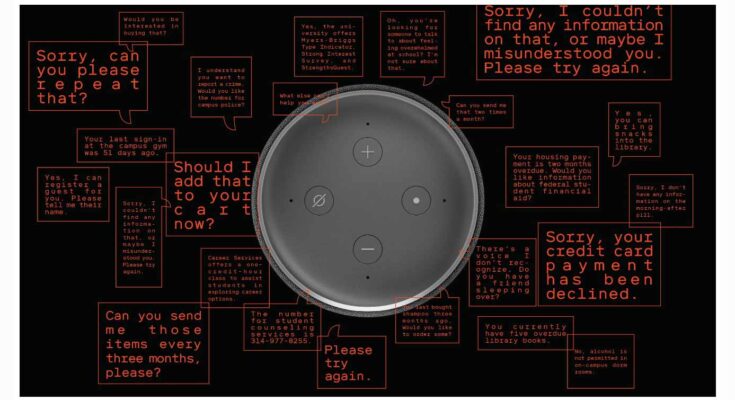 “Administrators say installing listening devices like Alexa in student bedrooms and hallways could help lower dropout rates. Not everyone agrees.”

When Mateo Catano returned for his second year as an undergraduate at Saint Louis University in the fall of 2018, he found himself with a new roommate—not another student but a disembodied brain in the form of an Amazon Echo Dot.

Earlier that summer, the information technology department at SLU had installed about 2,300 of the smart speakers—one for each of the university’s residence hall rooms, making the school the first in the country to do so. Each device was pre-programmed with answers to about 130 SLU-specific questions, ranging from library hours to the location of the registrar’s office (the school dubbed this “AskSLU”). The devices also included the basic voice “skills” available on other Dots, including alarms and reminders, general information, and the ability to stream music.

For Catano, the Dot was a welcome addition. He liked hearing the weather first thing in the morning and knowing which dining halls were open. And, if he’s being honest, he liked the company. “Living in a single, AskSLU definitely made me feel less lonely,” he says. “And I liked the status of being at the first university to do this.”

Catano’s reaction was exactly what SLU administrators were hoping for. This fall, the Jesuit institution announced plans to broaden the voice skills of its Echo Dots by including both text messaging and chatbot functions.

No idea of the long-term effects

We’re on the verge of a new era of smart speakers on campus. Schools as wide-ranging as Arizona State University, Lancaster University in the UK, and Ross University School of Medicine in Barbados have adopted voice-skill technology on campus. Some, including Northeastern University, have taken the technology a step further and now give students access to financials, course schedules and grades, and outstanding fees via voice devices.

Administrators at some of these schools told me they believe Alexa will bolster enrollment and reduce dropout rates. Several also said they believe voice technology can increase their students’ success and boost their overall happiness.

However, there are plenty of people on campus who see a dark side.

“When it comes to deploying listening devices where sensitive conversations occur, we simply have no idea what long-term effect having conversations recorded and kept by Amazon might have on their futures—even, quite possibly, on their health and well-being,” says Russell Newman, an Emerson professor who researches the political economy of communication and communications policy.

Other faculty members I spoke to echoed Newman’s objections. What if data harvested from students’ conversations affected their chances of getting a mortgage or a job later on? What if it were used against foreign students to have them deported, possibly to home countries where they could be imprisoned for their political views?

Right. So given all the risks, why are colleges so eager to fill their campuses with AI-enabled microphones? What’s in it for them?

Kathryn Miles is a freelance writer and the author of Quakeland: On the Road to America’s Next Devastating Earthquake. Her story “The Little Coin That Ate Quebec” appeared in the May/June 2018 issue [of MIT Technology Review].