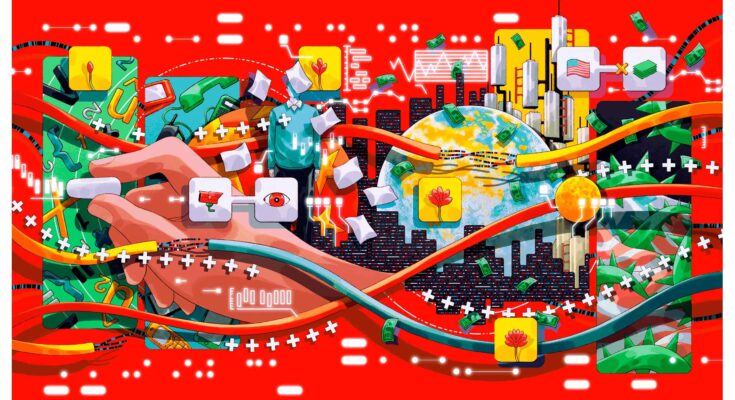 ““The key to discoveries is to look at those places where there is still a paradox,” Arıkan says. “It’s like the tip of an iceberg. If there is a point of dissatisfaction, take a closer look at it. You are likely to find a treasure trove underneath.””

“The city of Shenzhen in July. The weather is hot, the trees brimming with life … ”

So begins the baritone voice-over in a video shot in the summer of 2018 by the Chinese telecommunications giant Huawei and posted to YouTube. It chronicles a corporate event in the slightly corny style of a 1960s educational film, starting with aerial drone footage of Huawei’s campus—an island of lush greenery surrounded by the high-rise buildings of the city known as China’s Silicon Valley. A spirited orchestral version of Beethoven’s “Turkish March” plays as a town car wends its way through the campus, pulling up to a stately white structure mixing classical Greek architecture and the wide overhanging rooftops of China’s great pagodas. There’s a bit of the White House tossed in too.

Two footmen dressed in white approach the vehicle as it arrives. One opens the rear door. Guo Ping, one of Huawei’s rotating chairmen, steps forward and extends a hand as the guest emerges. After walking a red carpet, the two men enter the magnificent marble-floored building, ascend a stairway, and pass through French doors to a palatial ballroom. Several hundred people arise from their chairs and clap wildly. The guest is welcomed by Huawei’s founder, Ren Zhengfei, whose sky-blue blazer and white khakis signify that he has attained the power to wear whatever the hell he wants.

After some serious speechifying by a procession of dark-suited executives, Ren—who is China’s Bill Gates, Lee Iacocca, and Warren Buffett rolled into one—comes to the podium. Three young women dressed in white uniforms enter the room, swinging their arms military style as they march to the stage, then about-face in unison as one holds out a framed gold medal the size of a salad plate. Embedded with a red Baccarat crystal, it depicts the Goddess of Victory and was manufactured by the Monnaie de Paris. Ren is almost glowing as he presents the medal to the visitor.

This honored guest is not a world leader, a billionaire magnate, nor a war hero. He is a relatively unknown Turkish academic named Erdal Arıkan. Throughout the ceremony he has been sitting stiffly, frozen in his ill-fitting suit, as if he were an ordinary theatergoer suddenly thrust into the leading role on a Broadway stage.

Arıkan isn’t exactly ordinary. Ten years earlier, he’d made a major discovery in the field of information theory. Huawei then plucked his theoretical breakthrough from academic obscurity and, with large investments and top engineering talent, fashioned it into something of value in the realm of commerce. The company then muscled and negotiated to get that innovation into something so big it could not be denied: the basic 5G technology now being rolled out all over the world.

Huawei’s rise over the past 30 years has been heralded in China as a triumph of smarts, sweat, and grit. Perhaps no company is more beloved at home—and more vilified by the United States. That’s at least in part because Huawei’s ascent also bears the fingerprints of China’s nationalistic industrial policy and an alleged penchant for intellectual property theft; the US Department of Justice has charged the company with a sweeping conspiracy of misappropriation, infringement, obstruction, and lies. As of press time, Ren Zhengfei’s daughter was under house arrest in Vancouver, fighting extradition to the US for allegedly violating a ban against trading with Iran. The US government has banned Huawei’s 5G products and has been lobbying other countries to do the same. Huawei denies the charges; Ren calls them political.

Huawei is settling the score in its own way. One of the world’s great technology powers, it nonetheless suffers from an inferiority complex. Despite spending billions on research and science, it can’t get the respect and recognition of its Western peers. Much like China itself. So when Ren handed the solid-gold medal—crafted by the French mint!—to Erdal Arıkan, he was sticking his thumb in their eye.

The pageant was the coming of age of a company and a nation. And to understand why, we have to learn the story of polar codes.

Maybe for the first time in a thousand years, China is showing they are competing head to head with the rest of the world in technology. The US could live with intellectual property theft, but it is much harder to live with being in competition with an equal power.

“Polar codes itself is not what’s important,” he continued. “It is a symbol. 5G is totally different than the internet. It’s like a global nervous system. Huawei is the leading company in 5G. They will be around in 10, 20, 50 years—you cannot say that about the US tech companies. In the internet era, the US produced a few trillion-dollar companies. Because of 5G, China will have 10 or more trillion-dollar companies. Huawei and China now have the lead.”

US companies and the US government can no longer expect to beat China back with threats or indictments, even if they are sometimes warranted. And it’s not just telecom companies like Huawei. For all the furor at the highest levels over whether the teen-oriented social app TikTok presented security issues, the real threat to American business was that its Chinese engineers had devised an AI-powered recommendation engine that Silicon Valley had not matched.

Arıkan says the experience has led him to respect Huawei—and to provide a warning to the country where he learned information theory. “I owe a lot to the US,” he says. “I give you friendly advice: You have to accept this as the new reality and deal with it accordingly.”

Steven Levy covers the gamut of tech subjects for WIRED, in print and online, and has been contributing to the magazine since its inception. His newest column, Plaintext, will soon only be available to subscribers; sign up here. He has been writing about technology for more than 30 years, writing columns for Rolling Stone and Macworld, leading technology coverage for Newsweek, and cocreating a tech publication, Backchannel, on Medium. (Backchannel was integrated into WIRED in 2017.) He has written seven books, including Hackers, Crypto, Artificial Life, Insanely Great (a history of the Macintosh), and, most recently, In the Plex, the definitive story of Google. He attended Temple University and has a master’s degree in literature from Penn State. He works from the New York office.