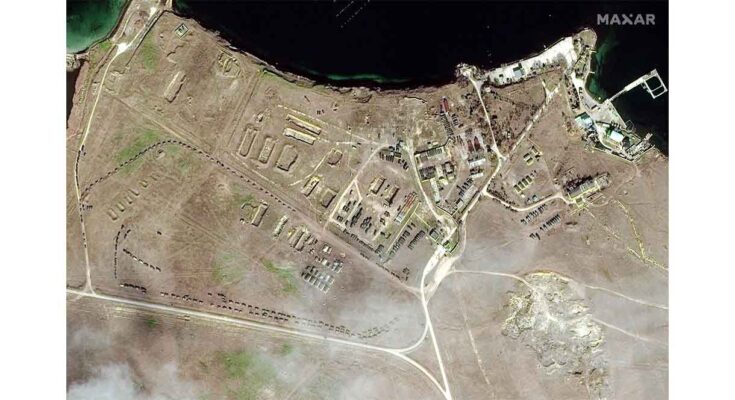 “If Russia Invades Ukraine, TikTok Will See It Up Close”
WIRED, February 17, 2022
Security
By Matt Burgess

“As troops amass on Ukraine’s border, civilians capture it all on camera. Online sleuths are now unpacking the details.”

On the snowy roads near Kursk, tanks and military equipment stop traffic. Videos from around the Russian city—roughly 100 miles from the border with Ukraine—show cars waiting in line to cross train tracks being used to transport tanks from one place to the next. Dozens of military vehicles have been filmed parked together. And shaky footage shows tanks rumbling across snowy ground alongside a busy road. All of these records have one thing in common: They were shared on TikTok.

If Russia invades Ukraine, don’t expect the TikToks to stop. From small Belarusian villages to industrial Russian cities on the Ukrainian border, as the tanks and troops have rolled in, local residents have captured the scenes on their phones—and uploaded what might one day be crucial evidence to social media.

“There is a lot of data out there,” says Benjamin Strick, investigations director at the Centre for Information Resilience (CIR), a nonprofit organization that focuses on countering influence operations. The CIR team, along with other open source investigators, have been busy verifying and mapping videos of troop movements in Russia and Belarus for several weeks, painstakingly comparing landmarks in video footage with satellite images and other official data to confirm their authenticity. The CIR’s map of verified videos plots the movements of military equipment and troops all around Ukraine’s eastern flanks. In January, the CIR mapped 79 pieces of footage; in February, it has verified 166 videos so far.

Since April 2021, the mobilization of Russian troops has been accompanied by reams of digital evidence. These come from a variety of sources, from smartphone footage to high-resolution overhead images captured by commercial satellite companies. Troops, helicopters, and military hardware have all been spotted in satellite images. But for people on the ground, TikTok has emerged as a key platform for showing military movements.

“TikTok is definitely one of the main platforms being used to document this,” says Eliot Higgins, the founder of open source investigative unit Bellingcat, which has been exposing Russian espionage for years. That footage often also finds its way onto Twitter or other social media platforms and joins other footage being posted there.

The TikTok videos from around Kursk—all of which have had their location verified by the CIR—provide a snapshot of how powerful open source intelligence, also known as OSINT, has become. The videos contribute to media reports and policy discussions. They can be low quality and poorly framed, but they show exactly what is happening at a specific moment in time.

However, there are risks. Those sharing footage from Russia and Ukraine—including open source investigators, journalists, and people on social media—could wind up amplifying incorrect information if it has not first been verified. “We will have to be careful consumers of information—suspicious to the possibility of active measures designed to fool us,” Sandra Joyce, an executive vice president and head of global intelligence at security firm Mandiant, wrote in a blog post.