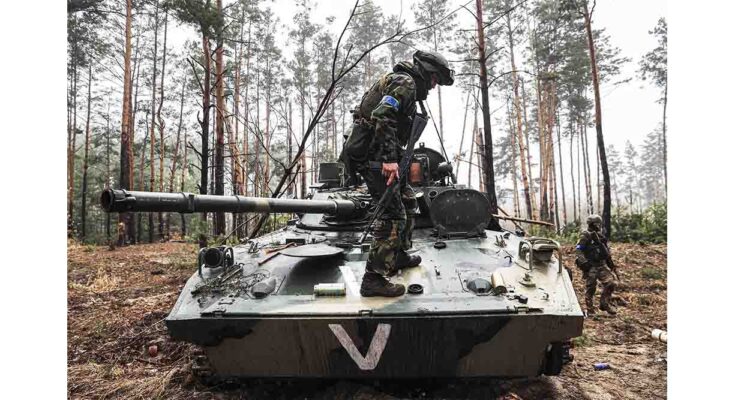 “As Russia Plots Its Next Move, an AI Listens to the Chatter”
WIRED, April 4, 2022
Business
By Will Knight

“With vast amounts of data becoming available to intelligence analysts, new tools will help them sift and interpret it all—but they will introduce new risks, too.”

A radio transmission between several Russian soldiers in Ukraine in early March, captured from an unencrypted channel, reveals panicked and confused comrades retreating after coming under artillery fire.

“Vostok, I am Sneg 02. On the highway we have to turn left, fuck,” one of the soldiers says in Russian using code names meaning “East” and “Snow 02.”

“Got it. No need to move further. Switch to defense. Over,” another responds.

The third Russian soldier continues, becoming increasingly agitated: “Get on the radio. Tell me your situation and the artillery location, approximately what weapon they are firing.” Later, the third soldier speaks again: “Name your square. Yug 95, answer my questions. Name the name of your square!”

As the soldiers spoke, an AI was listening. Their words were automatically captured, transcribed, translated, and analyzed using several artificial intelligence algorithms developed by Primer, a US company that provides AI services for intelligence analysts. While it isn’t clear whether Ukrainian troops also intercepted the communication, the use of AI systems to surveil Russia’s army at scale shows the growing importance of sophisticated open source intelligence in military conflicts.

A number of unsecured Russian transmissions have been posted online, translated, and analyzed on social media. Other sources of data, including smartphone video clips and social media posts, have similarly been scrutinized. But it’s the use of natural language processing technology to analyze Russian military communications that is especially novel. For the Ukrainian army, making sense of intercepted communications still typically involves human analysts working away in a room somewhere, translating messages and interpreting commands.

The tool developed by Primer also shows how valuable machine learning could become for parsing intelligence information. The past decade has seen significant advances in AI’s capabilities around image recognition, speech transcription, translation, and language processing thanks to large neural network algorithms that learn from vast tranches of training data. Off-the-shelf code and APIs that use AI can now transcribe speech, identify faces, and perform other tasks, often with high accuracy. In the face of Russia’s numerical and artillery advantages, intercepting communications may well be making a difference for Ukrainian troops on the ground.

Primer already sells AI algorithms trained to transcribe and translate phone calls, as well as ones that can pull out key terms or phrases. Sean Gourley, Primer’s CEO, says the company’s engineers modified these tools to carry out four new tasks: To gather audio captured from web feeds that broadcast communications captured using software that emulates radio receiver hardware; to remove noise, including background chatter and music; to transcribe and translate Russian speech; and to highlight key statements relevant to the battlefield situation. In some cases this involved retraining machine learning models to recognize colloquial terms for military vehicles or weapons.

Will Knight is a senior writer for WIRED, covering artificial intelligence. He was previously a senior editor at MIT Technology Review, where he wrote about fundamental advances in AI and China’s AI boom. Before that, he was an editor and writer at New Scientist. He studied anthropology and journalism in the UK before turning his attention to machines.