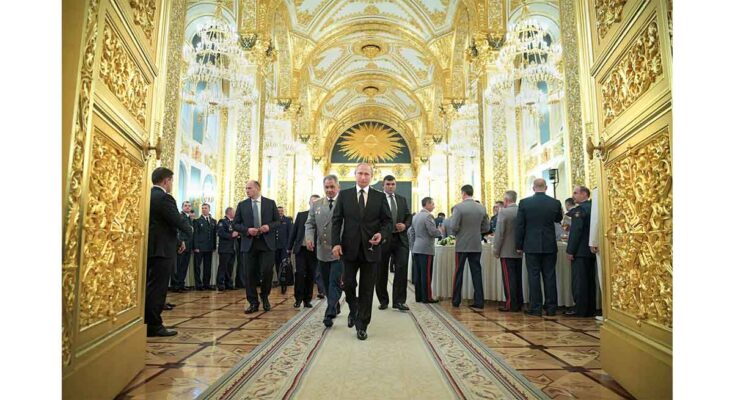 “Understanding just how extensive and coordinated Russia’s operations against the West are represents the first step in confronting—and defeating—Putin’s increased aggression, particularly as it becomes clear that the 2016 election interference was just a starting point.”

A dead dog in Moscow. A dead dissident in London. Twitter trolls run by the Kremlin’s Internet Research Agency. Denial of service attacks and ransomware deployed across Ukraine. News reports from the DC offices of Sputnik and RT. Spies hidden in the heart of Wall Street. The hacking of John Podesta’s creamy risotto recipe. And a century-old fabricated staple of anti-Semitic hate literature.

At first glance these disparate phenomena might seem only vaguely connected. Sure, they can all be traced back to Russia. But is there any method to their badness? The definitive answer, according to Russia experts inside and outside the US government, is most certainly yes. In fact, they are part of an increasingly digital intelligence playbook known as “active measures,” a wide-ranging set of techniques and strategies that Russian military and intelligence services deploy to influence the affairs of nations across the globe.

As the investigation into Russia’s influence on the 2016 election—and the Trump campaign’s potential participation in that effort—has intensified this summer, the Putin regime’s systematic effort to undermine and destabilize democracies has become the subject of urgent focus in the West. According to interviews with more than a dozen US and European intelligence officials and diplomats, Russian active measures represent perhaps the biggest challenge to the Western order since the fall of the Berlin Wall. The consensus: Vladimir Putin, playing a poor hand economically and demographically at home, is seeking to destabilize the multilateral institutions, partnerships, and Western democracies that have kept the peace during the past seven decades.

The coordinated and multifaceted Russia efforts in the 2016 election—from the attacks on the DNC and John Podesta’s email to a meeting between a Russian lawyer and Donald Trump Jr. that bears all the hallmarks of an intelligence mission—likely involved every major Russian intelligence service: the foreign intelligence service (known as the SVR) as well as the state security service (the FSB, the successor to the KGB), and the military intelligence (the GRU), both of which separately penetrated servers at the DNC.

Understanding just how extensive and coordinated Russia’s operations against the West are represents the first step in confronting—and defeating—Putin’s increased aggression, particularly as it becomes clear that the 2016 election interference was just a starting point. “If there has ever been a clarion call for vigilance and action against a threat to the very foundation of our democratic political system, this episode is it,” former director of national intelligence James Clapper said this spring. “I hope the American people recognize the severity of this threat and that we collectively counter it before it further erodes the fabric of our democracy.”

Indeed, Western intelligence leaders have warned throughout the spring that they expect Russia to use similar tricks in German parliamentary election this fall, as well as in the 2018 US congressional midterms and the 2020 presidential race. “Russia is not constrained by a rule of law or a sense of ethics—same with ISIS, same with China,” says Chris Donnelly, director of the UK-based Institute for Statecraft. “They’re trying to change the rules of the game, which they’ve seen us set in our favor.”

Russia’s active-measures playbook, according to public and private-sector investigators, dates back to Czarist Russia and the beginning of the Soviet Union. It has been honed and deployed over decades to advance Russian interests both at home and abroad—and has long been driven by a consistent geopolitical worldview, executed in distinct ways, and guided by a unique tradecraft philosophy at odds with the approach of Western intelligence services.

But enough throat clearing. Let’s break it down, shall we?

Part of what makes the active-measures playbook effective, according to Western intelligence, is that the tactics are guided not just by Putin’s grand strategic goals but by uniquely Russian tradecraft which differs in key respects from Western efforts.

Garrett M. Graff is a contributing editor at WIRED. He covers national security and is, most recently, the author of Raven Rock: The Story of the US Government’s Secret Plan to Save Itself—While the Rest of Us Die. He is a director at The Aspen Institute. He is the author of the No. 1 national bestseller The Only Plane in the Sky: An Oral History of 9/11. See also in Internet Salmagundi: